The gallery is delighted to present an exhibition of works by Olivier Mosset focusing on the lesser-known aspects of the artist’s graphic and edition based practice. The exhibition reflects the same tendencies that have pre-occupied the Swiss artist for over forty years; namely the value of pure abstraction vis-a-vis the conditions of production of an artwork within the canon of art histories and the influences of Dadaism, Duchamp and Pop Art.


Mosset (b. 1944 in Bern, lives and works in Tucson, Arizona) has been working since the late sixties in his minimalist style of painting, maintaining an allegiance to geometry and monochrome, and constantly re-articulating what a painting can represent outside of figuration and story telling. Within the 20th century history of objective and autonomous painting - where the painting is ‘what it is’ (the process) - Mosset keeps re-defining notions of appropriation and authenticity. Here, content is dissolved into its form, and the object seeks to become its own subject — "the representation of its own representation" (Mosset, 2001)


A series of posters from the BMPT artist collective (Daniel Buren, Olivier Mosset, Michel Parmentier and Niele Toroni) are exhibited as documentation of their ‘’Manifestations’’ at the Museum of Decorative Arts and the Paris Biennale in 1967, in which they declared, amongst other statements, that they were not ‘painters’ per se.


A ‘clin d’oeuil’ to Marcel Duchamp is apparent in the lithographic series, TUM’, MUTT, TUTU, (2014), a series of block-letter prints which can exist individually or as a group. TUM’ was the title of Duchamp’s last painting in 1918. Read in reverse order, the letters become MUT(T), referring to Duchamp’s infamous ready-made Fountain (1917). Using repetition in a Dadaist manner, TUTU re-uses some of the same letters to arrive at the ballet-dancing garment of the same name.
Presented in book form, Toblerones (2009) is a cut-out edition of forty-five triangulated multifaceted chunks of cardboard, whose shape and title recall the now ubiquitous Swiss chocolate bar, but which in actuality are based on the forms of concrete anti-tank blocks from WWII, commonly seen in the Swiss landscape.


Repetition is evident in the 4-part series Untitled (2004) which depicts two black bars on a white background; Identical except for their vertical or horizontal display, which can then optically refer to the letter E.


Made with the 51 students of the Rennes Art School in France in 2007, the multi-coloured series Repetitions et Variations represents a simple abstraction of the letter D, re-iterating as the title suggests ideas of variations and repetition. Each is signed by the individual student and the artist.


Last Run at Montriond 14 is a short video work made in Lausanne in 2014. Shot inside the Circuit art Centre the film depicts a ‘happening’ where the owner of a Chevrolet car, a Malibu SB 350 Blower, continually revs up the engine to the max, creating the deafening sound of tires sliding on the concrete floor accompanied by lots of unpleasant smoke - A car performance as a pose to an art performance.


The small photographic edition entitled La Chute d’eau (2009) is a photograph of a waterfall above Lausanne taken in exactly the same spot and from the same angle as Marcel Duchamp took with his friend Francis Picabia in the 1910’s.


A pair of small aluminium plates (Untitled, 2012) stem from a recent invitation by the Paris Galerie des Multiples to various artists - asking them to respond to a 1921 letter by Marcel Duchamp to his friend Tristan Tzara in which he proposed an idea for an edition project which he called DADA Fétiche. The idea was to have 4 letters (D A D A) stamped on metal to be worn by the viewer as a lucky charm in various possible shapes - a bracelet, a necklace or a tie pin – functioning like a ‘Fétiche’ object.


Untitled (1991) is a lithograph made for the Catherine Issert Gallery in St-Paul, France. A simple geometric yellow print on a white background, the work can be read as either squares or arrows, creating an optical illusion which one can read differently as they wish.


Repetitions and reversals occur regularly in these graphic works as if becoming tools for changing identities, emerging from each other, through each other or because of each other, spelling out elements in the artist’s search for neutrality and effacement. 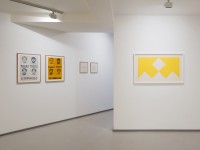 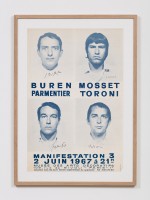 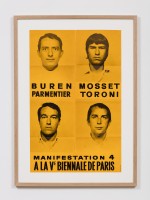 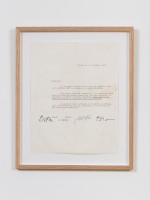 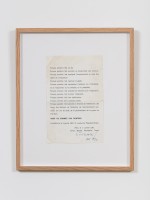 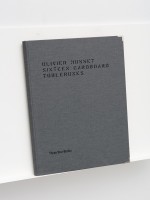 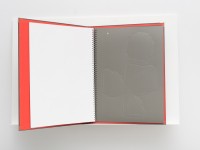 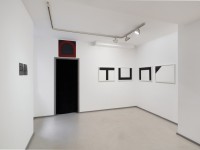 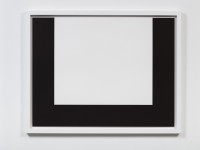 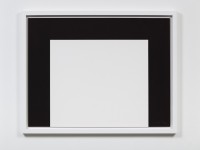 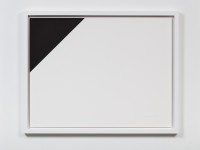 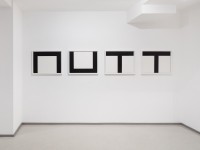 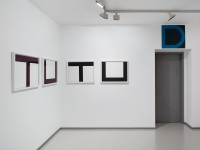 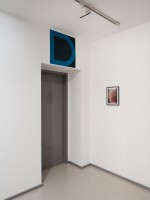 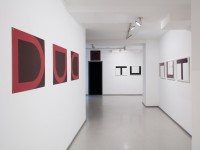 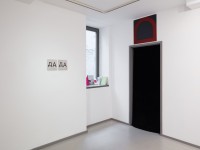 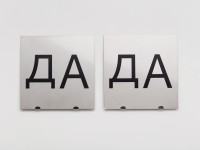 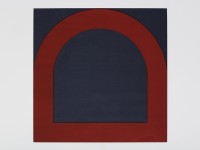