Frédéric Pradeau, born in 1970 and living in Paris takes as a starting point for his exhibition a found piece of sliced bread left in a trolley by a tramp in Hyde Park in 2001. The tramp ate the centre of the soft bread and left the crust, leaving a shape resembling the Pound Sterling symbol. Pradeau entitles the work Fortune. From a simple symbol to the vast notion of money, the artist then derives multiple paintings, drawings and sculptures, associated with the effects that money creates, numerically or quantitatively, emphasising its arbitrariness.

The silver painting entitled Argent plays on the French double meaning, both silver and money and carries on the duplicity through its reflective surface. A red petrol plastic container inflated by the artist is appropriately entitled Inflation.

In Arman circa 1974, the lithograph of the famous French artists is folded into a boat, thus revaluating the numbered edition into a unique artwork.

DAZIBAO is the Chinese translation of the 35h per week French Working Law. The Chinese have a reputation for working long hours and DAZIBAO was originally presented the same way as the Communist Party single leaf official paper, pasted on Parisian public walls in the Chinese quarters and bears the same name.

One glass bottle was made for an exhibition at the Museum of Atlanta (headquarter of Coca Cola) and contains alcohol distilled from Coca-Cola. The second glass bottle downstairs has an unreachable £1 coin inside, the hand-made bottle having been blown especially for the coin.

The relationship to money is further expanded in Eraser Heads, a series of £1 coins on which the face of the queen has been erased, as if guillotined.

In the construction industry, chipboard is designed pink when waterproof and green when fireproof. Here the artist stuck them together, back to back, to annihilate their functional usage and further plays with their display, turning one into a seating bench. The works are entitled From Water to Fire and From Fire to Water.

The painting Yummy White Magic is a mix of words and abstraction linking desire for food and health with that of money whilst the white monochrome painting called Through White bears the artist’s signature barely visible rendering it more legitimate, artistically and financially.

This is his first solo exhibition in London after his participation at the Liverpool Biennale in 2007. 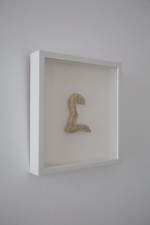 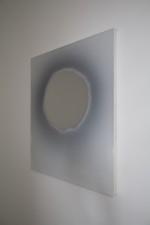 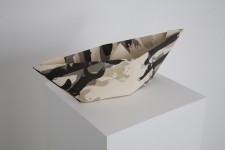 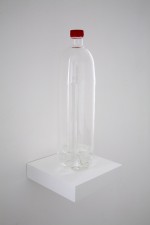 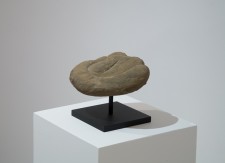 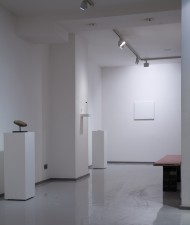 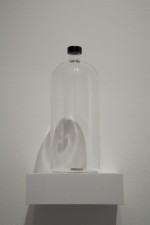