Formal conjunctions, irreverent material relationships and the blurring of object, image and site offer architectural resonances within this exhibition.

Works reveal a reflexive attitude whilst gorging on the environmental surroundings and absorbing their own circumstance and sense of place.

Sculptural and time-based, each encounter within the exhibition is framed by a suggestion of habitation and intentioned proximity. 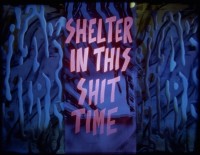