The Angels of London

Peter Wüthrich is a Swiss artist based in Bern who has for the past twenty years used the physical appearance of the book (form and linen texture) as the principal component of his visual practice. Using the book as his art form, the artist has thought of wide-ranging permutations that make up his imaginary world.

The London exhibition consists of the presentation of a project, The Angels of London, as well as other works.

The Angels of London is part of an on-going series of photographs, which the artist has executed in different cities, starting in Santiago di Compostela in 2004 then Milan, Mexico City, Madrid and now London.

For the project, the artist walks the streets, stops pedestrians and asks them if they would kindly ‘become angels for 5 minutes’ by posing for his photographs wearing an open book on their back like a rucksack. The book, with its connotations to knowledge, imagination and creativity, metamorphoses itself into ‘angel wings’. He has walked London streets in all parts of town for five days taking hundred of photographs. He will present them as framed photographs and a slide show.

Other works made from books allude to the domestic or apartment context of the gallery and become beds, carpets, curtains, clothing, food cans or birds.

With a child-like lightness and a happy freedom, the artist transforms, dissects and cuts through the book in every way possible to produce a rich visual language where the substance and plot pay a particular homage to the book. 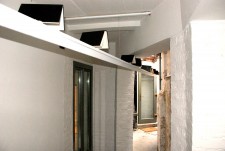 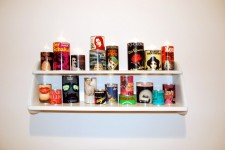