This exhibition brings together two artists who deal with colour and shape in baroque-style excesses. Seductive, engaging and frighteningly singular, their unlimited love for sugar-sweet colours and roundness of forms proposes an antithesis to the minimal neo-conceptualism of the programme.

Both artists share a desire to make abstract art that have a quality that looks, through their apparent clumsiness, amateurish. They are interested in biomorphic forms, which sit on the edge between the seductive and the repulsive. With great intensity, time- consuming efforts and a determined obsession, they both pursue personal developments towards abstraction, which at times parodies notions of Modernism.

Matt Franks draws his inspiration from a wide choice of sources ranging from Modernist sculpture, contemporary cartoons and the Baroque. Using industrial plastics such as Styrofoam and polystyrene, meticulously hand-carved and sanded down, he gives life to a fantasy of gravity-defying sculptures resonating with humour and playfulness. The two sculptures presented, Zoicks and New Gods, both from 2002 could resemble plants found in another galaxy.

Gemma Nelson’s highly cellular abstractions use a wide variety of materials such as Indian inks, enamel, acrylics, filtered pen, wax beads, cotton thread, paper collages and others. The obsessively crafted cells create a chaotic tapestry-like response to various themes such as female sexuality or notions of webbing and nets. In other parts Gemma’s world is drawn from, and pays homage to the patterning and totemic tattoos of indigenous peoples from around the world.

‘I see my paintings as being objects of condensed time, suggesting disruption, mutation and beauty. Each of the obsessively crafted cells in my work represents a slot of a few minutes in the production of the painting, although when viewed in their entirety, the cells in my paintings merge and are reminiscent of the psychedelic patterns of the sixties. We can only make sense of time as being a linear journey, although in reality time bends, warps and shifts.’ – Gemma Nelson 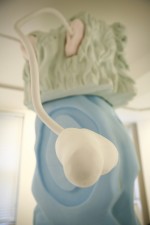 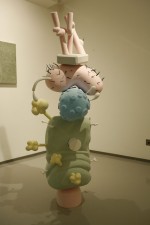 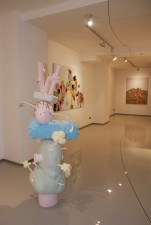 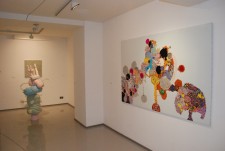