Hanway Place are pleased to present ‘Topic’, a solo exhibition of new work by Paris based artist Zoë Paul. Paul employs a tactile and intuitive approach to materials, pattern and form. Allowing the material quality and nature of things to guide her practice through a process of working and thinking physically. Interested in the context within which objects might be read and how objects are encountered by a viewer, Paul frequently references strategies inherent in methods of display. With sensitivity to the architectural context of Hanway Place, Paul’s work leads the viewer through a physical and material narrative, culminating in the basement installation that offers an atmosphere of impending unease. With much of the work for ‘Topic’ being made while in Greece, the exhibition could be viewed as a response to the political and economic climate in Europe which has served as a poignant backdrop for Paul over this period of time. Influenced by Camille Claudel’s ‘The Wave’ of 1903, the exhibition speaks of a moment in time frozen, a heterotopic space, not defined by it’s walls but an intangible space in time defined by a set of relations and associations.

On entering the exhibition, a dull throb emanating from the basement will entice the viewer on their journey. Past the printed silk works, on to a series of wall based sculptures, collectively titled ‘Mazeuvei’. Mazeuvei, translated from greek can be understood to mean to gather or to collect but perhaps also within the context of the current economic crisis, of people helping each other. In these works, coloured wool is woven through found fridge grills to create abstract patterns that encourage the viewer to read identifiable solid forms that are ambiguous like ever dissolving border definitions. Influenced by gestalt theory, these works are experiential. The soft wool holding tightly within it’s self with connotations to the domesticity of weaving set against the old rusted fridge grill, a discarded consumerist object. Finally, the source of the sound work. A new sculptural piece entitled ‘Mur’ emitting light and sound creating a disquieting, glowing space and environment. A space to gather, commune and reflect. Feeling similar to a secular church, a nightclub even, or as with the bathers in Camille Claudel’s ‘the wave’ a space of surrender and ambivalence. The ‘other’ space, Heterotopia. 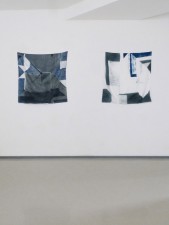 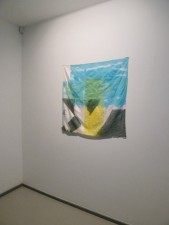 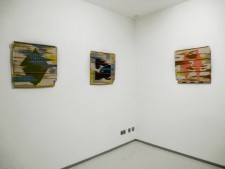 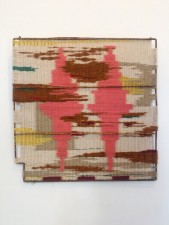 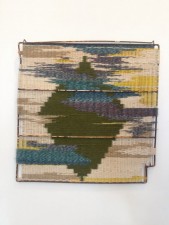 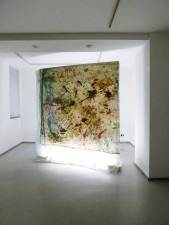