Hanway Place are pleased to present Reforming Intervals, an exhibition of new work by London based artist Frank Ammerlaan. For this solo presentation at Hanway Place, Ammerlaan will introduce a new body of work bringing together video, sculpture and painting, placing the viewer in an environment of material and psychological conflict.

Reforming Intervals takes it's name from a new video work Ammerlaan made in Russia. Shot in several orthodox monasteries and churches such as Rizopolozhensky monastery in Suzdal, known as the oldest active monastery in Russia from 1207, the video positions the viewer as an unwitting voyeur caught in the middle of private rituals and actions of conflicting ideologies and authorities. The film's powerful depiction of faith is set amongst a body of work that questions notions of belief and truth, certainty and ambiguity.

In a new diptych, Untitled, 2014, Ammerlaan presents a revised approach to his familiar, large scale, colour field paintings. Both canvases exhibit their rich, deep, almost etherial quality of surface and yet present an uncanny similarity of form. Under close inspection it becomes apparent that one is in fact a copy of the other, a step by step re-enactment, each stage of the first act recorded, copied and re-made. Revealing evidence of a strict process, the notion of pure expression is undermined, the the artistic gesture rationalised.

Downstairs, a large scale sculptural intervention consumes the lower gallery. Using electro-plated corrugated steel, a familiar material from Ammerlaan’s past works but here employed on an architectural scale, the reflective sheets of conductive material curve through the space from floor to ceiling, providing a charged context within which to situate the other painting and video works. A new sculptural work seems curiously at odds with this environment however and looms ominously from the ceiling poised to absorb tangible frictions. Made from glass insulating rings found on electricity pylons, Ammerlaan has grouped these heavy, functional objects in totemic structures, their non conductive properties serving to undermine the potency of the steel enclosure.

Throughout the exhibition scientific rational, evidenced particularly by paintings made purely from chemical reactions are incongruous with the artistic gesture. Chance played against process, the secular against the religious. Within all the works a dichotomy of idea's influenced by Ammerlaan's interest in Immanuel Kant's theories of the noumenal and phenomenal worlds, expressed in his celebrated work the critique of pure reason permeate. Duality and contradiction pervade throughout the exhibition as gestures are un-picked and positions undermined. 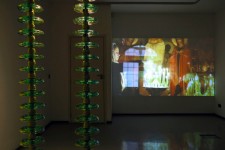 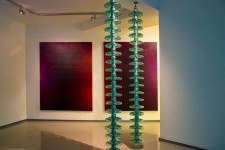 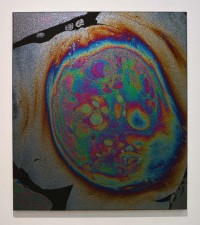 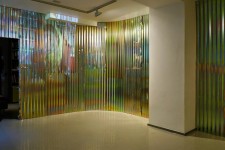 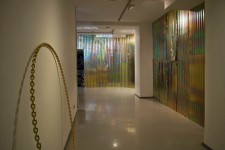