Hanway Place are pleased to present Pleats Please, a solo exhibition of new work by George Henry Longly. Longly’s work, comprising of readymade objects, stickers, marble and materials with common associations to both the built environment and product design, engages with modes of display and notions of what constitutes professional activity, creative labour and artistic output. Combining explicit cultural references such as the Flintstones or Regaine with a method of making that is more akin to the design process, Longly offers up a plethora of possible outcomes. By employing the process and systems of industrial product design, the work opens up meanings by offering the potential for it to exist elsewhere within the cultural landscape.

The process of making and the evaluation of cultural trends, coming in and out of focus, draw on parallels with the fashion industry and the history of art. The title Pleats Please is both a link to the brand by Issey Miyake and its innovative use of architectural structuring, standardised manufacturing processes and application of inter-changable colours, patterns and prints. It also alludes to a hypothetical and imagined character for Longly, a 90’s art dealer, and a line of clothing becoming a uniform for one area of the cultural industries.

Throughout Longly’s practice, a standardisation of size and type is evident. We encounter mirrored glass of ‘standard’ size, over-layed with stickers of a familiar repeated snake motif. These sculptural pieces, designed to quite literally implicate the viewer through their mirrored surfaces are contextualised amongst a new sound work. The Mysteries of Love was recorded backstage at the London menswear shows in June 2013. Consisting of audio samples, songs and a computer generated voice, it operates as a soundtrack for the exhibition. The Mysteries of Love is a vivid display of performance with no visible performer and instills the viewer with a sensory self awareness suggesting that one is complicit in the work.

Pleats Please is a precursor to a performance that Longly is developing at the Serpentine Gallery in September 2013 as part of the Park Nights programme. He will use the Hanway gallery throughout the summer as a rehearsal space for the development of this piece. The choreography and content of the performance will be based on the structure of a fashion show.

I really need your help with something, 2013 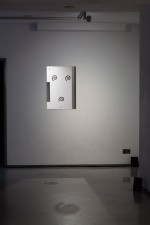 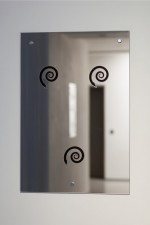