Laure Genillard are pleased to present new works by Michel Verjux in his first solo exhibition in the UK. Born in 1956 and based in Paris, Verjux has used light as his primary medium from 1983. His works are constructed by projecting circular beams on walls, or into the environment with a powerful projector. Circular or semi-circular, truncated or involving a shadow, the light projections relate to a moment in time in a given space. The ‘éclairages’ reflect on the act of showing through multiple profiles, cuts and points of focus.

‘My aim is to use its capacity both to move us and to provoke physical interactions with different elements, factors and parameters that are specific to the work as well as to the place we are in and the moment at which it is exposed, and of course, at the same time, to use its capacity to question the way we look upon the world at large' Père-Lachaise studio, Paris, 2010 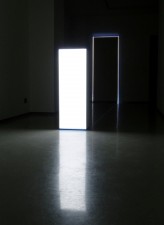