Laure Genillard is delighted to announce the launch of the 20th issue of Control Magazine. For over five decades, the pioneering non-profit magazine has documented and brought into discussion the work of artists from the UK and abroad. The launch will be accompanied by a group exhibition featuring participating artists; Bedfellows, Merlin Carpenter, Johanna Gustafsson Fürst, Francisco Camacho Herrera, Eliana Otta, Radio Anti and Stephen Willats.

Since its first publication in 1965, Control Magazine has operated as a vehicle for initiating networks amongst artists whose focus relies on the polemics and visions of people and their societies. Insinuating a provocation, the magazine’s title calls upon the cybernetic idea that people can take control of their surroundings and thereby deflect the controls of more authoritative systems. Extending this concern, the 20th issue of Control incorporates artists that represent a counter consciousness to the general dominance of object based thinking in contemporary culture.

Control Magazine is published and edited by Stephen Willats and has comprised writings and works from over 150 artists across its twenty issues, many of whom have made artwork specially for the magazine. Such artists include John Latham, Roy Ascot, Anthony Benjamin, Dan Graham, Mary Kelly, Helen Chadwick, Tony Cragg, Dennis Adams, Lawrence Weiner, Anish Kapoor, Martha Rosler, Jeremy Deller, alongside collectives and collaboratives such as Gallerie in Friedrichstrasse, Artists Placement Group and early producer’s galleries such as that of Dieter Hacker. 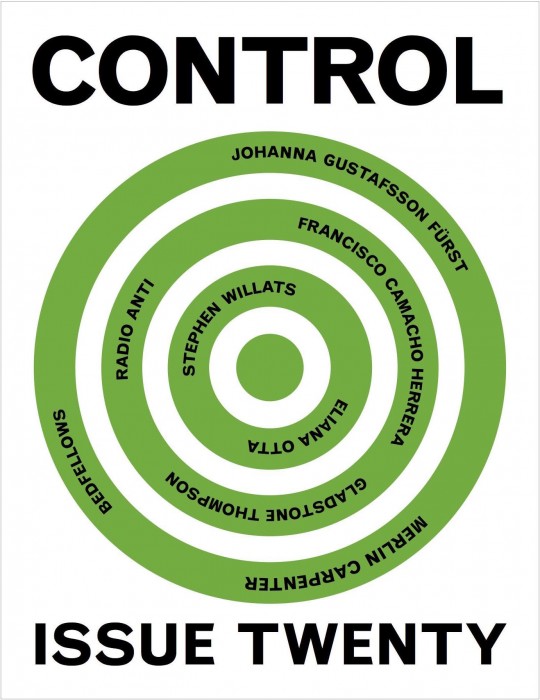